On the early morning my stomach decided that he accept Chinese food no longer.

I woke up with some heavy stomach-craps and left only for a workshop about textile fabrication hosted by the crazy peruian-guy from Tuesday. Was a promise so I had to go through that.

After a very little dinner I laid back in my bed, so really nothing to tell about this day.
🙁

On Wednesday morning we took a trip to the DongMen-street. Pinterest said it is one of the most famous pedestrian shopping streets in China, so we had to make a visit 😉 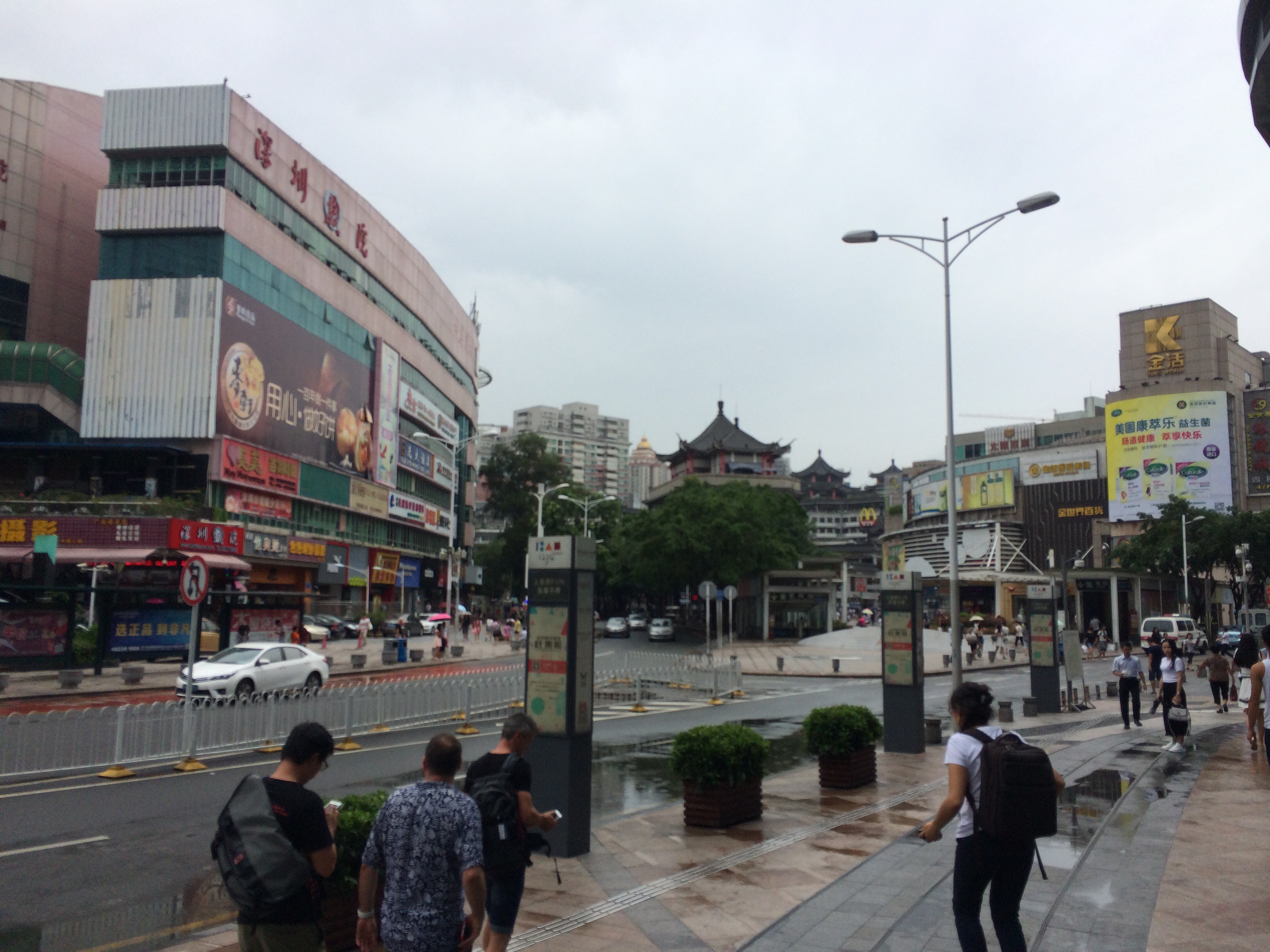 Well, it is a huge shopping street with a lot of markets, but 98% of the stuff you can buy there is copied. And 80% are handy-covers…

We found there nothing to buy, even the streetfood didn’t looked very tasty 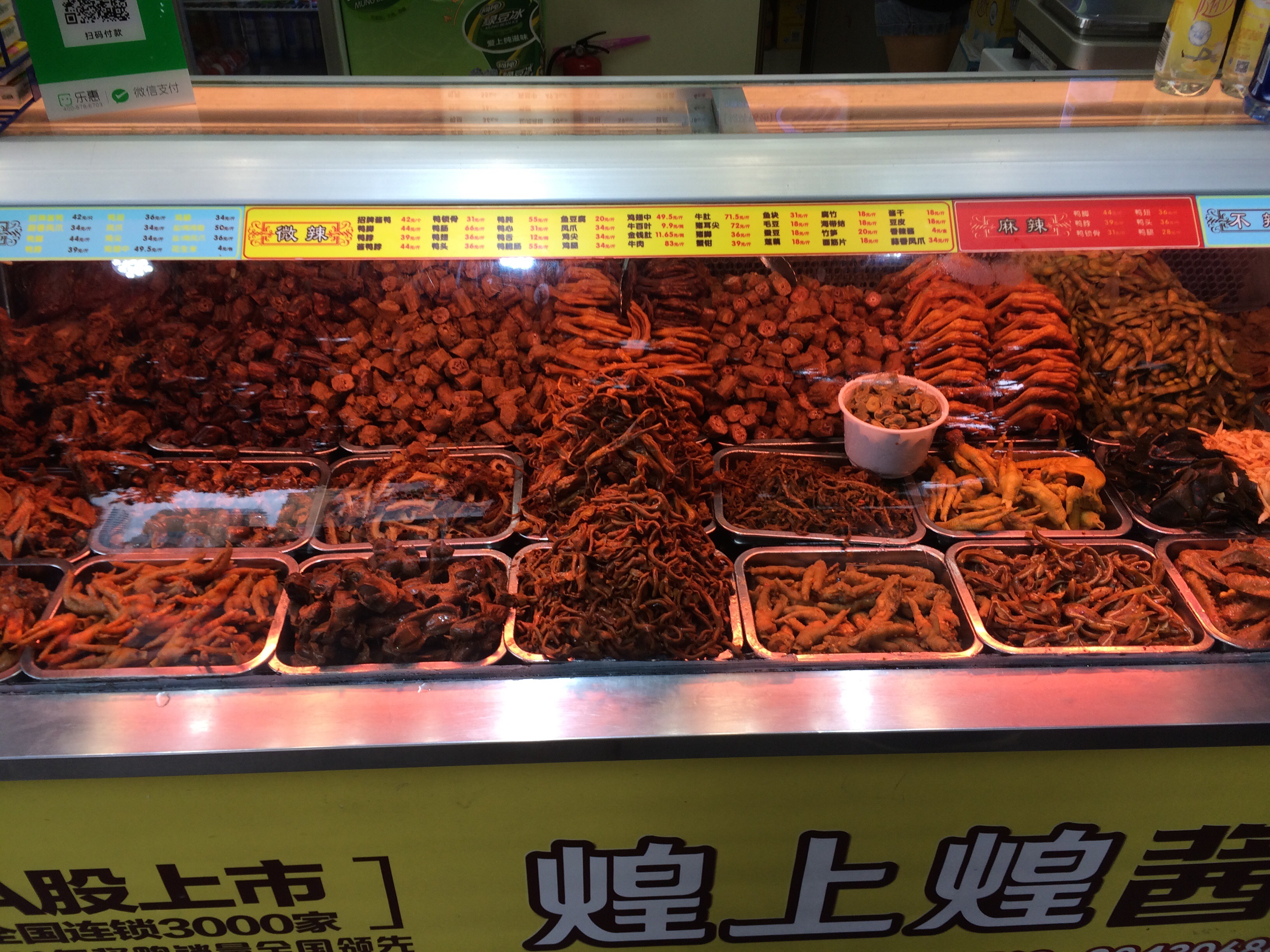 But I’ve found the world smallest McDonald’s I think, only ice cream in the menu 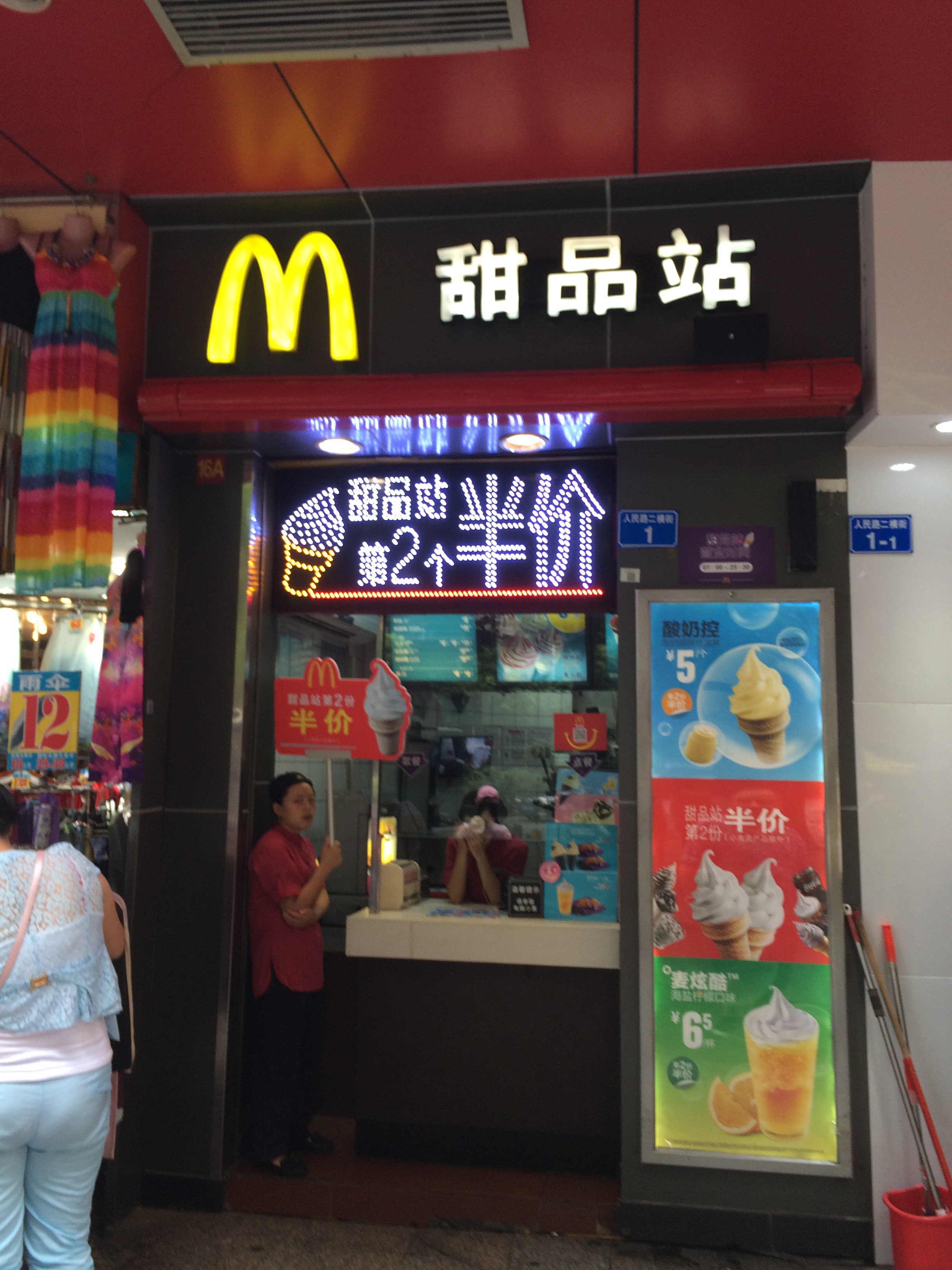 After this exiting shopping trip we headed back to the Sheraton hotel for the workshops, but the most of them were canceled due to some problems getting the materials to Shenzhen.

So I joined a workshop moderated by Ruben from the Fablab Enschede and Karsten from Kamp-Lintfort. The topic was how to connect the FabAcademy to our university and how to get more students in the fab labs. This problem isn’t discussed a lot in the FabCommunity because there a not many university-linked or driven Labs. So the main questions were, how a program like the FabAademy could be inserted into a normal studies curriculum. very interesting, and we have discussed a lot with some good results I think. It’s to early to say much about it…

After the workshops the whole Fab12 was invited by a company named 3NOD. 3NOD is a kind of startup-incubator. If you have a good idea and wants to bring it in the market, they will help you for a little charge. This includes finish the design and make it industrial, make the commercials, produce it and connect you with the companies that can sell your product.

First we had a tour thru their showrooms, with products from JBL, Harman/Kardon, Epson and so on… Cool things!

After this we had a dinner, with the ceremonial of creating a cowork between 3NOD and the FabFoundation. This was hosted by a guy named Richard Chiang. Crazy guy! You know Tony Stark from the IronMan movies? Richard is the real-world Tony!

We just had to take a selfie with him 😉 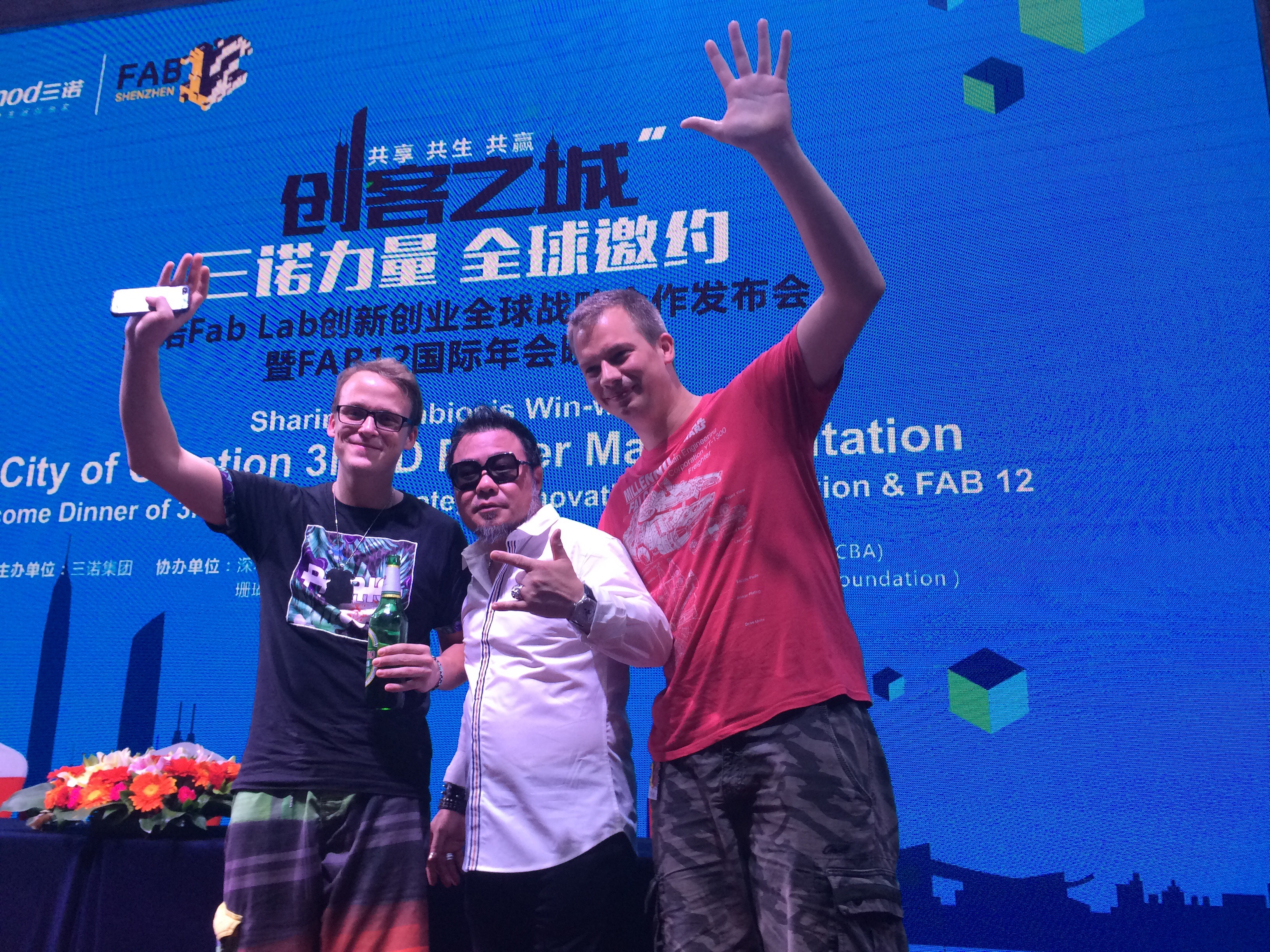 On they way back I could take some pictures from the outside Shenzhen. On every corner I a building-site, the whole town is growing while you look at it. Very impressive. 16 million needs space… 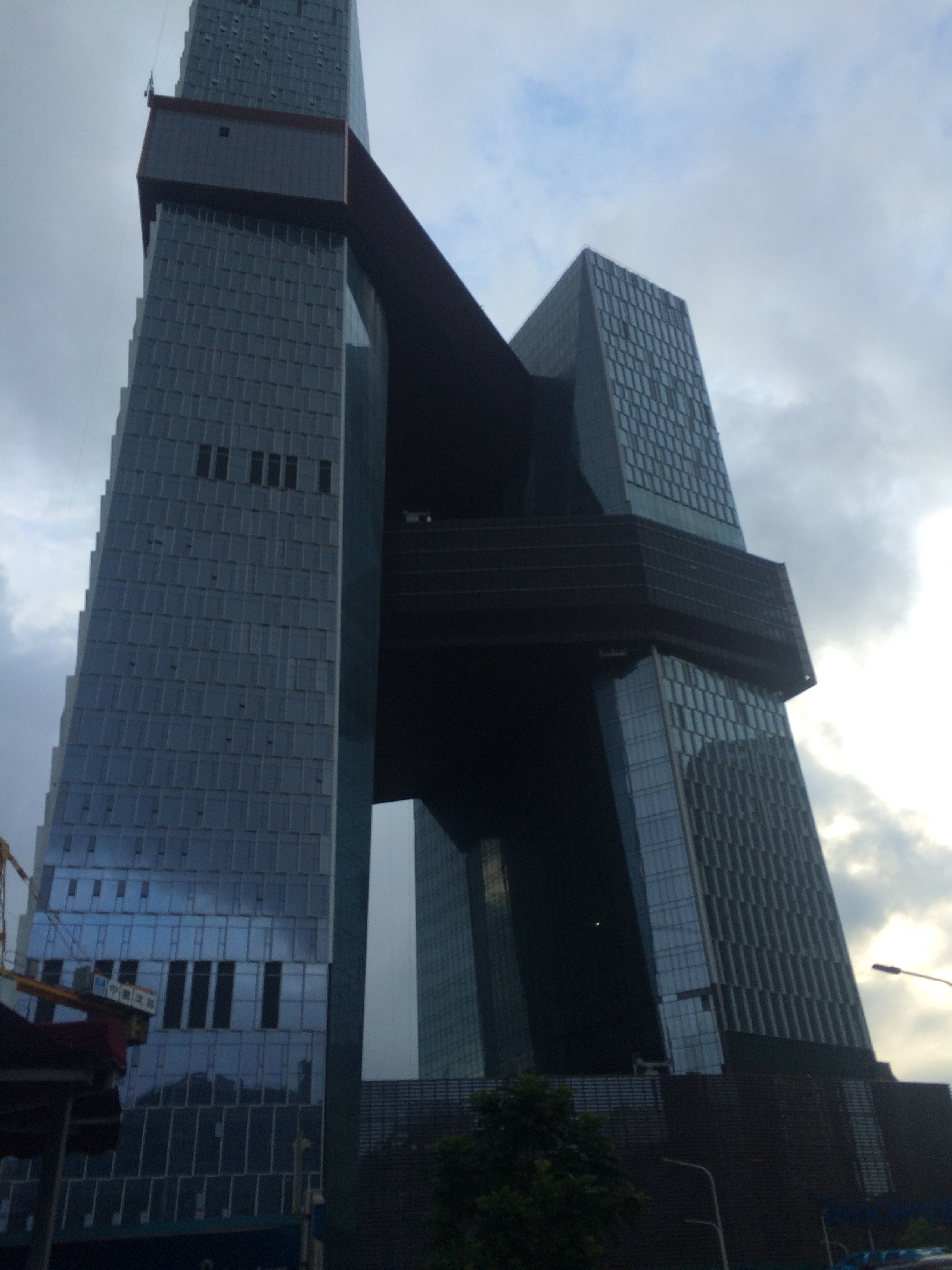 But although the city is very green, over 60% are coverd by plants 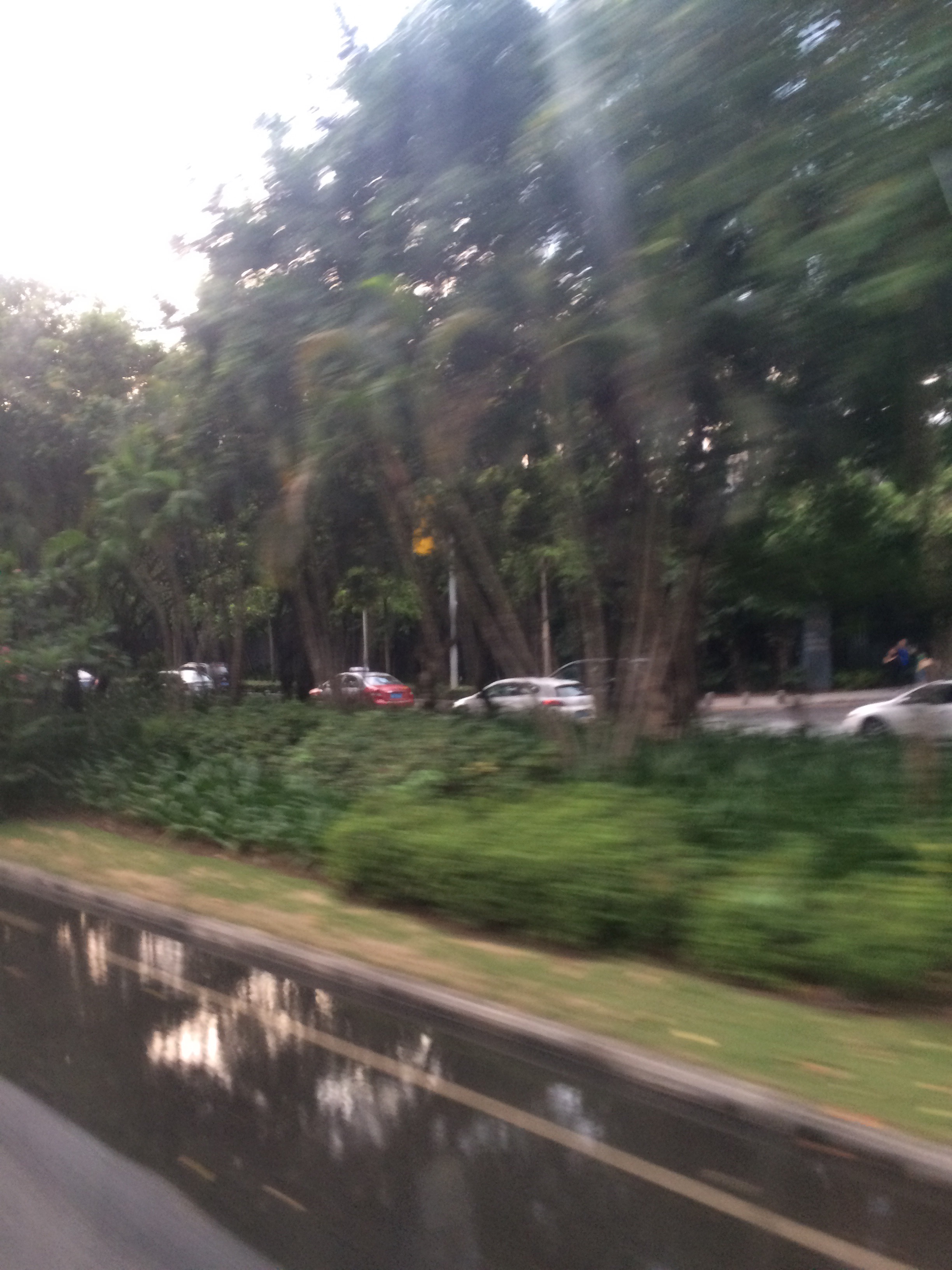 After the traditional Last Tiger-Beer at the brew we went to our hotel, with very full stomachs

Tuesday morning started with a crazy program from some guys from Peru, to wake everyone: throw lines in every direction thru the whole room:

After this we heard a lot of very interesting stage-talks and after lunch the workshops started. At first I visited a workshop for sketch things in VR with an oculus rift and a leap-motion sensor, driven by unity.

You sketch with your hands in the air, and after you finished you can export the whole thing to your 3D-printer.
Second workshop was an organizational discussion with bas, Thomas diaz and some more folks from the fab foundation about the future of FabAcademy. Very interesting, and I think we have worked out some good advices for the next years.

By the way, did I mentioned that the HRW is one of the four Nodes in Germany at which you can apply the FabAcademy? The others are Kamp-Lintfort, Aachen and Munich.

In the evening we had a poolparty at the Sheraton, but due to the bad weather (Thunderstorm with a LOT of rain) the party was relocated into the ballroom. So it was a poolparty without a pool. Nevertheless it was a great party 🙂

Today we went again to the SEG Plaza and buyed some of the cool things we have seen yesterday. Not much to write about, we have full bags now, and empty wallets 😉 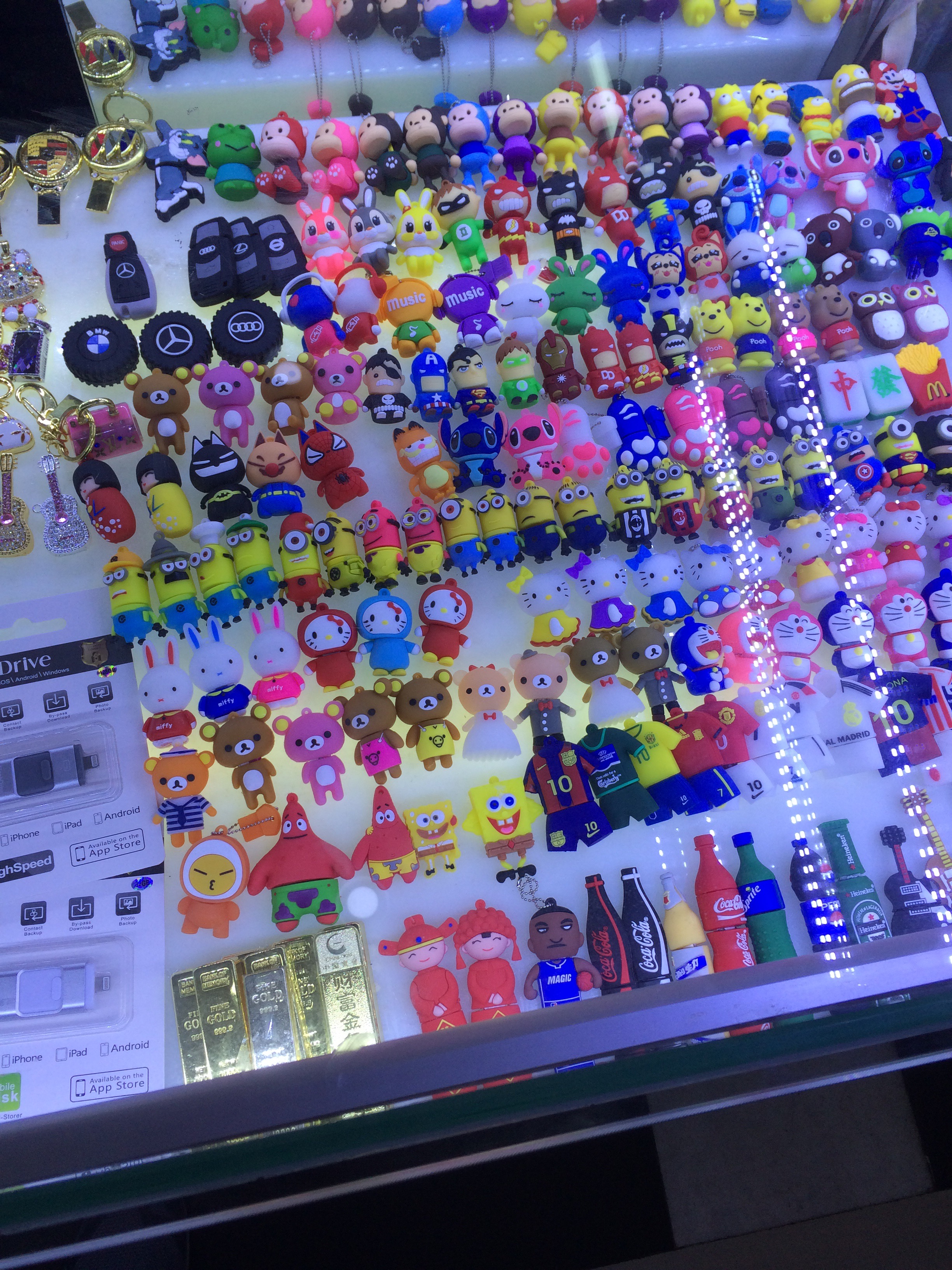 In the afternoon the fab12 was opened. After the registration we get a bag like last year, with some useful giveaways in it, like a security glass (sponsored by Google, so a kind of Google-glasses ;)) and maps of Shenzhen.

After this we get some dinner from the fab foundation: Johnathan called it safe food 😉 The food was tasty and the whine was tasty too

We met a lot of new people, like everyday, and went with some of them to another bar next to the coco-mall. Not much to say about, we had a lot of fun 😉

When we arrived in Shenzhen it was like landing on another planet. First I thought it’s because my lack of sleep, but now I know it better…

Hongkong is much like American cities, everyone speaks English and you will not have any problems to communicate or to recognize stuff in a 7eleven.

But as soon as you cross the border you leaf all the American and English things that you are familiar with behind you.

It’s really hard to find someone who speaks just a few words in a language you can understand a little bit. There are some 7eleven, McDonald’s and Starbucks, but the employees are hard to understand (no English, wrote that?) and even the meals and bottles and signs are only in chinese. We are very happy to have Johnathan with us, he translates the whole day. Without him we were lost… By the way, nobody is lost today 😀
Another problem is the great-Chinese-firewall. You can’t use Facebook or the most Google-services because it is banned. You just don’t get any connection. You are wondering how I can post on Facebook this morning? The secret-word is VPN… Build one to my router at home in Germany and tunnel through the firewall. If you ever plan a trip to China this is very common!
But apart of the communication-problems I’m surprised how modern the city is! On every corner is a buildingplace for a new skyscraper, thousands of bikes and scooters drive only electrical, the half of the taxis are e-cars, there are more LED-screens as in NYC! Very impressive…
So what have we done today:

After getting all the lost sleep we met Adriana, Karsten, Daniele and of course Johnathan again and drove by the subway to a place known as “SEG”-market. Mainly it is a market for electronic components but it is so huge! And so cheap by the way.

We entered the first house (the one you can find on the documentations on YouTube), and it is not just a market.

There are 9 floors with thousands of little stands, ordered by the things you can buy.

1st and second floor are reserved for electronic components, for example LCDs, resistors, LEDs in every single type you can imagine.

Then comes a few floors with more ready-to-use stuff. Cameras, laptops, routers… And as higher you get, the cheaper the prices get. Mainly because the products are just copies. You can buy a iPhone 6 for about 25€, but if you look exactly you see, that is running an android system 😀

Still a good price for a dual-sim smartphone with 4g, wifi, Bluetooth, dual-sim and two cameras…

On Sunday we just looked at the most stands, by buyed nothing. We’ll come back on Monday morning to buy the bestprices 😉

Outside and in the other buildings you could buy drones for about 15€, ebikes for 400€… Not the pedelecs you find in Germany, more like e-scooters! 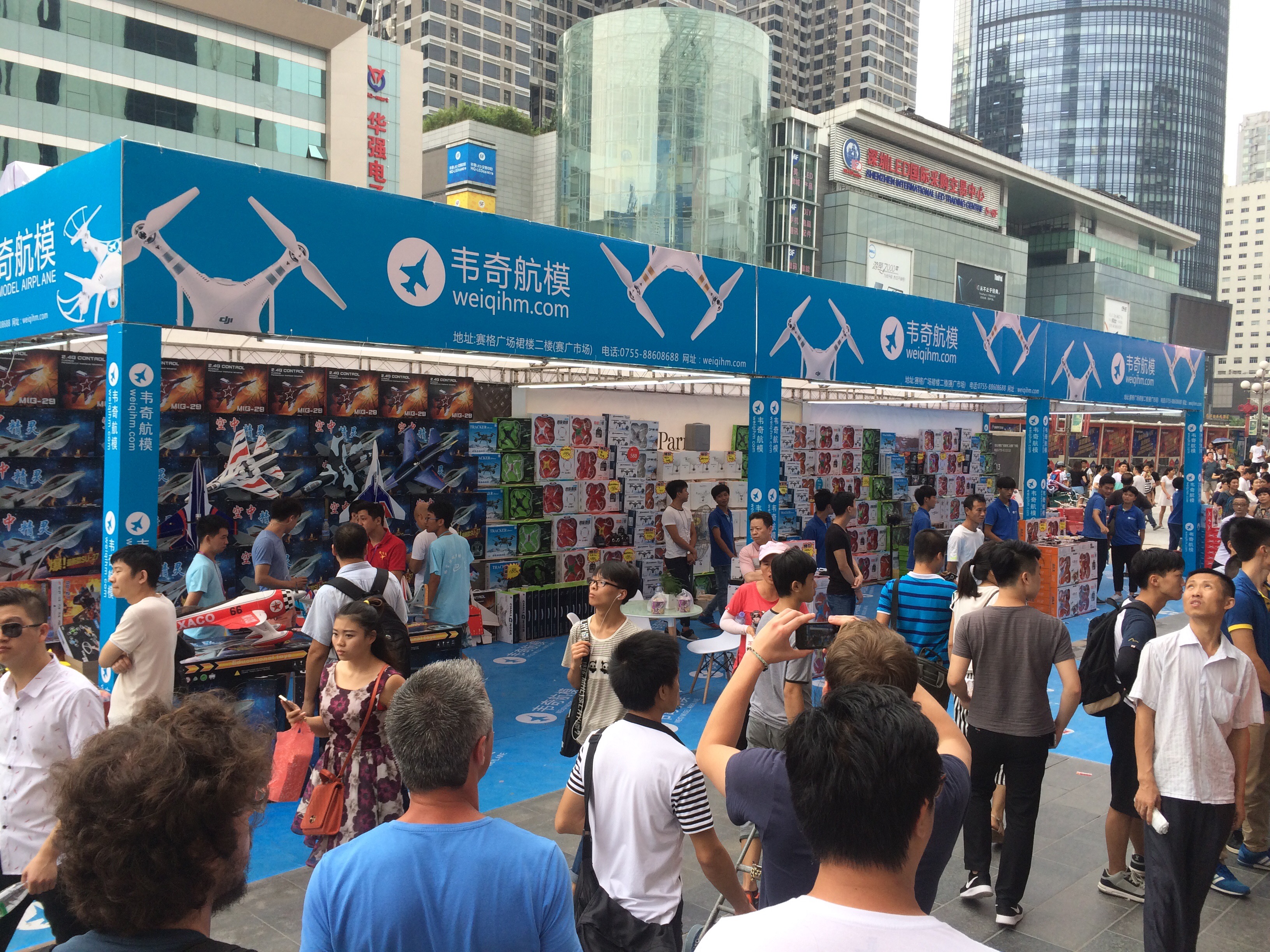 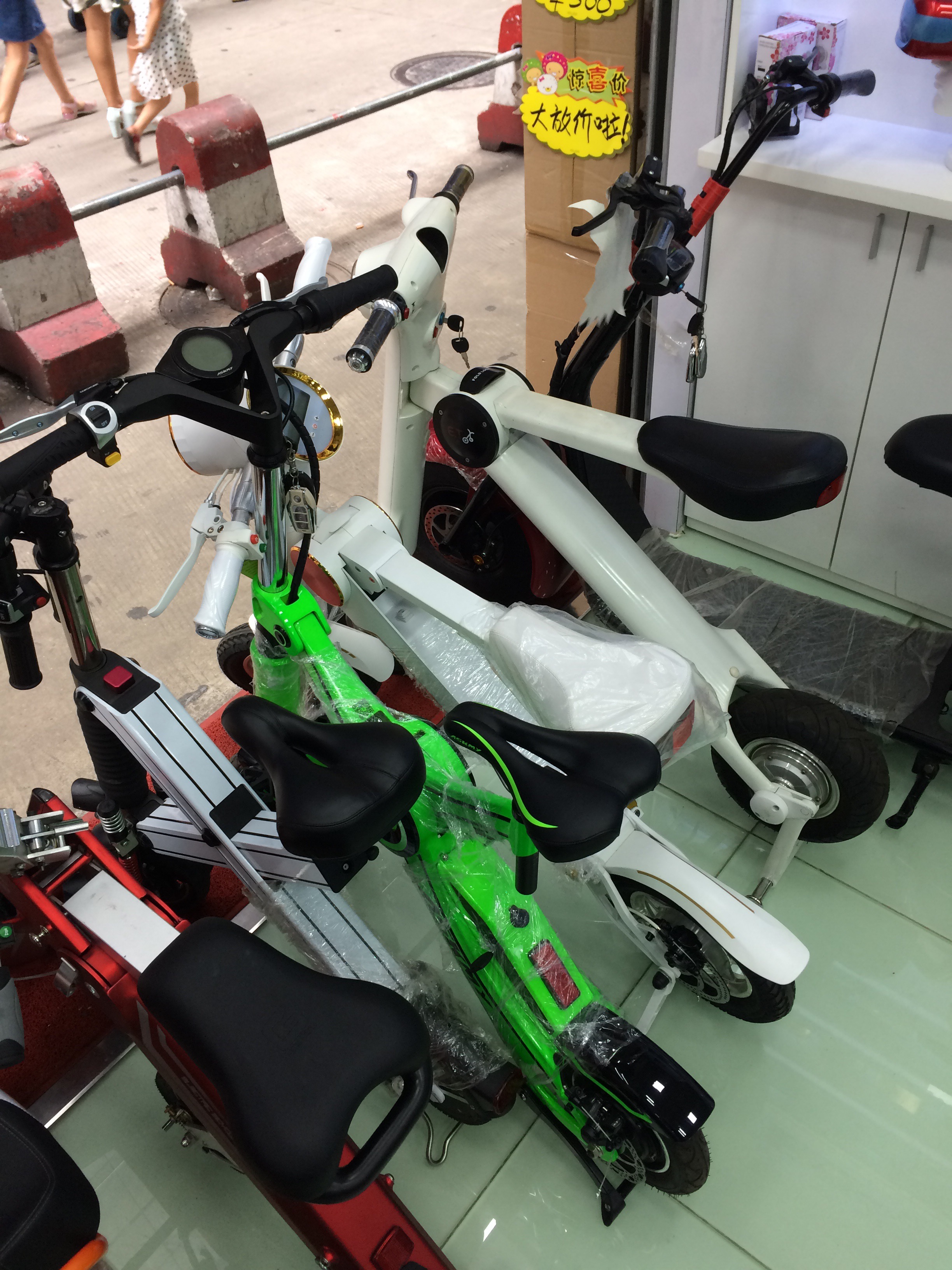 On the way back we made a quick stop at the Sheraton hotel. This is the place where the fab12 is placed…

In the lobby we met Neil and Jan, founder of the FabLab in Aachen, and to guys from the USA. I forgot their names…

However, we was hungry and Jan and the us-guys came with us. Hard to find a restaurant with a free table for 9 persons, so we ended up in a traditional Chinese-restaurant. 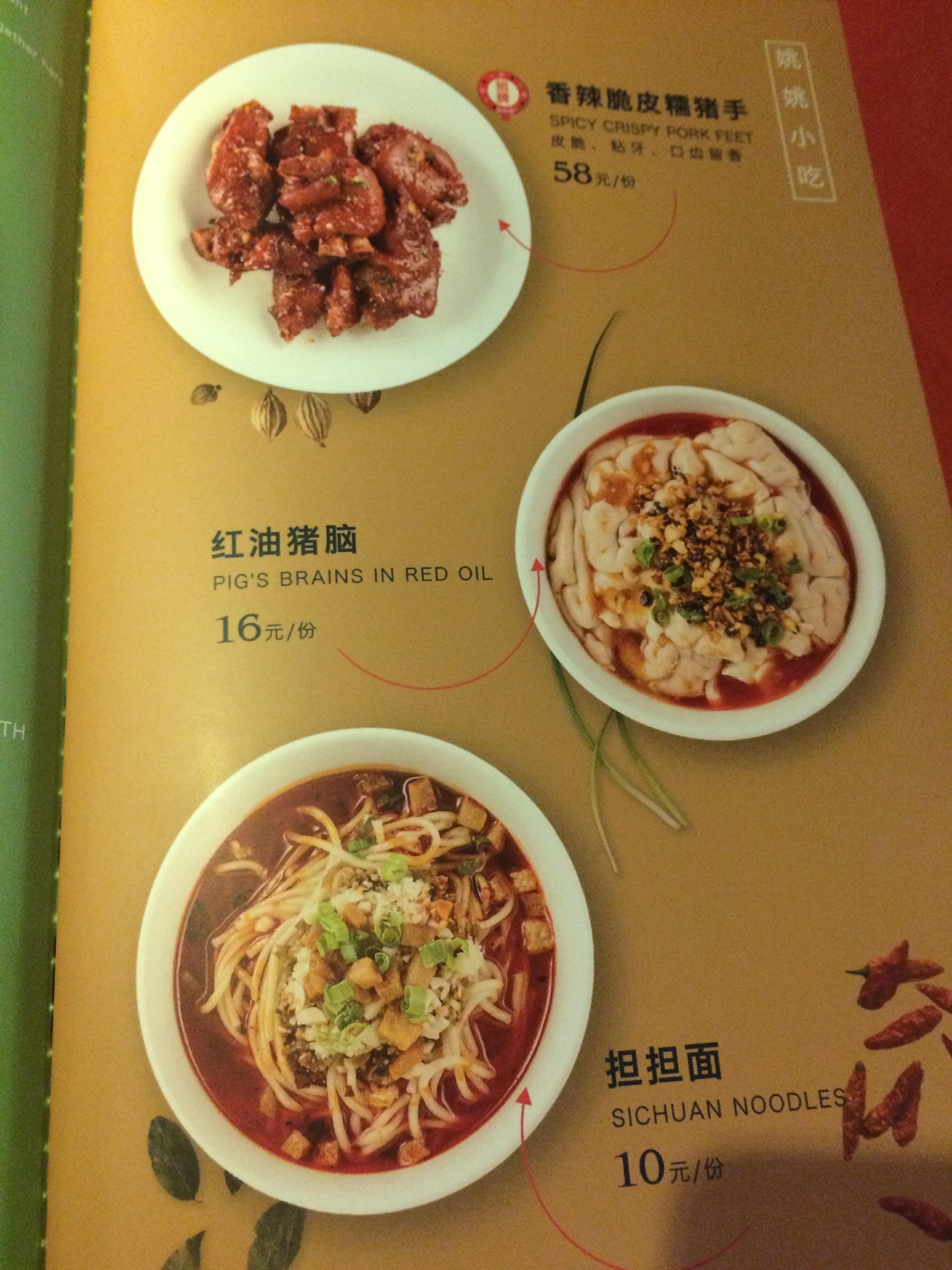 So he ordered some big plates with fish, shrimps, rice, noodles and vegetables. Worked nice and the food was tasty. I just tried the shrimps first and thought the red things were kidney beans. 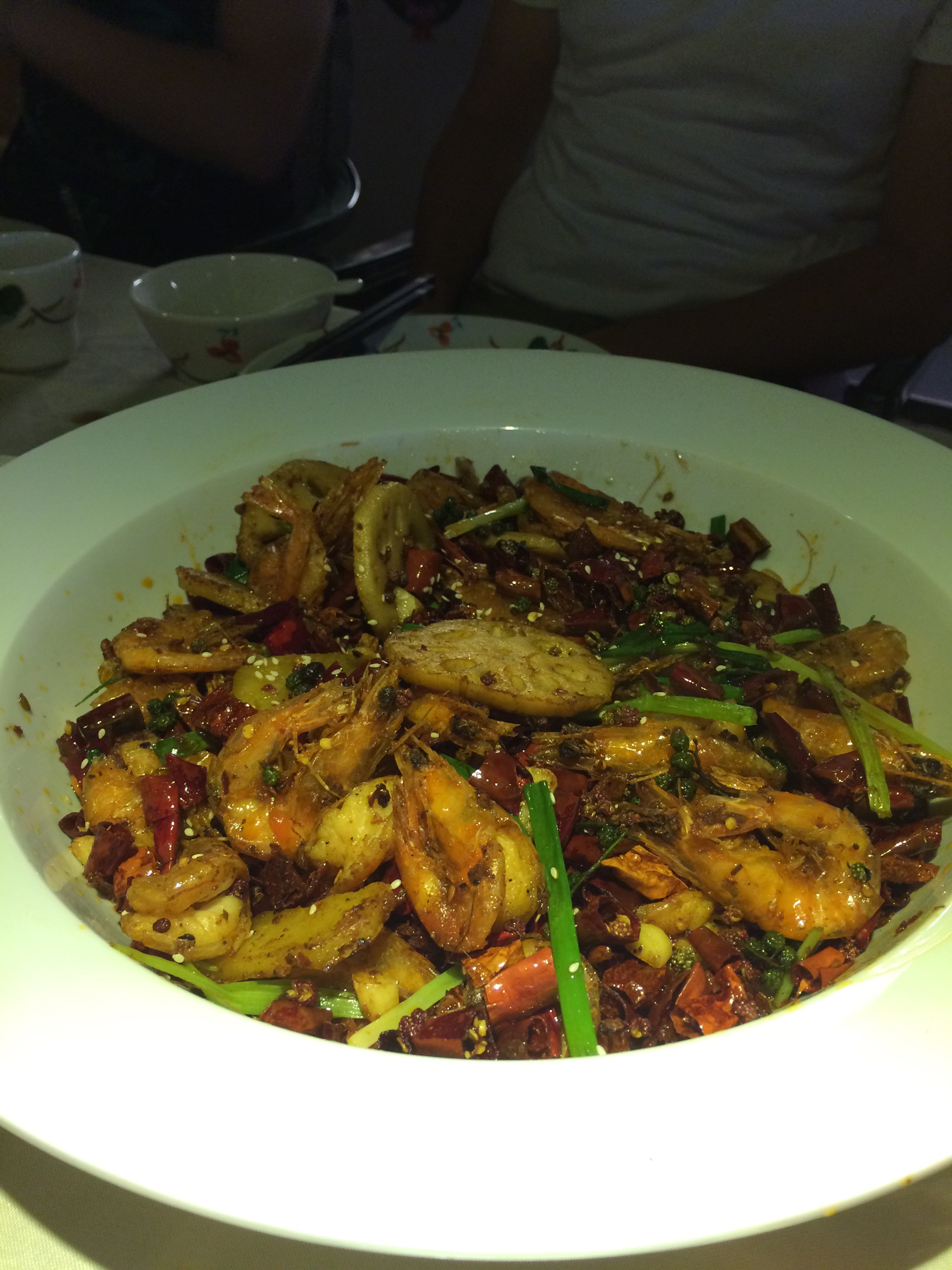 It was cutted and baked red chillies. Very hot…

So after the dinner we went to a bar next to the restaurant where you can sit outside with nice live-music and Indian tiger-beer, very good after the chillies…

After a few minutes some people from the Fablab Barcelona came over to the bar, and after 30 minutes we was a loud party-crowd of about 40 people!

Everyone orderd some drinks or food for just everyone and we had a lot of fun, meeting all the guys from last year or we knew from the FabAcademy.

Only got a theta from later on, when the most people was gone already, but better than nothing:

At 3am we went back to the hotel, happy about the very fine first day in Shenzhen 🙂

Pictures and so on comes as soon as I get a better WiFi!!
So folks, a little bit late but here is the first post out of China 🙂

On Saturday afternoon we landed in Hongkong and meet our friend Karsten from the Rhein-Waal FabLab. The original plan was to get directly to the hotel, check in and heading back to hongkong, visit the town. Just make a plan…

Our Visa says “number of entries: 1”,so in fact if we travel from Shenzhen back to Hongkong we can not come back to Shenzhen.

New plan: visit Hongkong directly after about 30 hours flying around the globe 😀

By train we drove to Kowloon, the “living area” of Hongkong.

There we met the whole Rhein-Waal team after running thru a labyrinth of a mall…
Thanks got Johnathan is in the RW-Team, a native chinese. Without him we were totally lost… He guided us thru Hongkong into a wonderfull park. Do you spot the flamingos and turtles?

Then we took a trip thru a shopping street to Victoriaharbor and made a short brake.

Took the boat on the other side and walked over Hongkong Island.

Johnathan guided us to a restaurant famous for its DimSum. And it was really really tasty! DimSum are small pieces of dough filled with different things like shrimps, pork, all kind of vegetables… 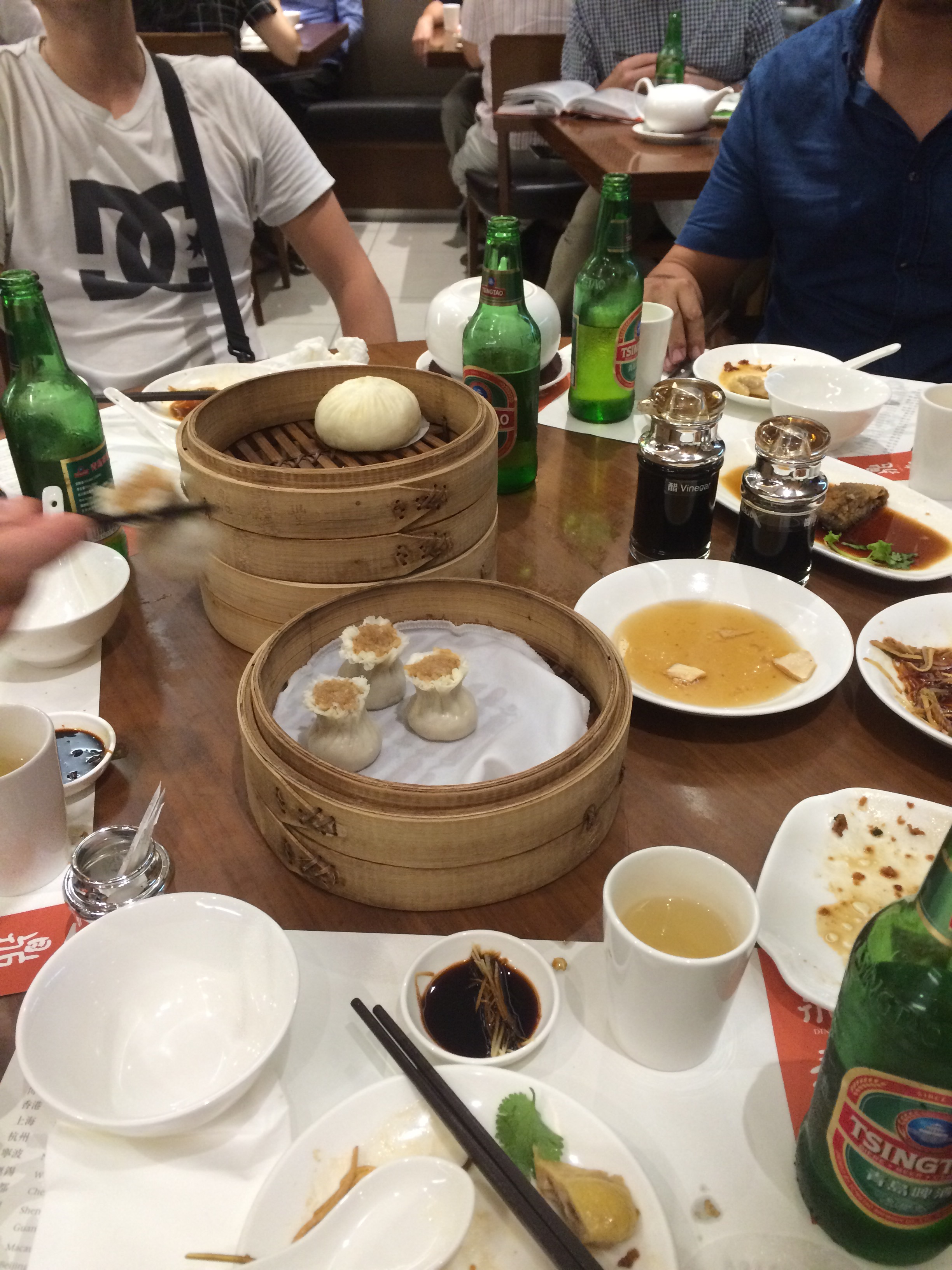 Took the metro to Shenzhen-border and realized that we are on the last train before the border closes. When we changed the train-line we lost Marcel. He used a taxi then to get to Shenzhen, but this is a story he should write him self about 😉

In Shenzhen I tooked a taxi to get to our hotel. Johnathan explained the driver where to go cause the driver didn’t spoke a single word in English. And I came like it had to come: he drove me the wrong hotel. To realize this it tooks about 15 minute, because also the women in the hotel didn’t spoke english 🤔

Took the next taxi to the right hotel and meet there with marcel, room is ok but the hotel doesn’t have the promised breakfast. So our breakfast-location will be the Starbucks 50m away.

Flight with the A380, Dubai-Airport and somewhere in Dubai…

The Taxi-driver told us that this were the tourist promenade 😉

A lot of Bling Bling

Now we are sitting at the airport again and wait the next 6 hours for our flight to Hongkong.

Thanks god the terminal has an A/C, outsidetemp is still about 40 degree 😰 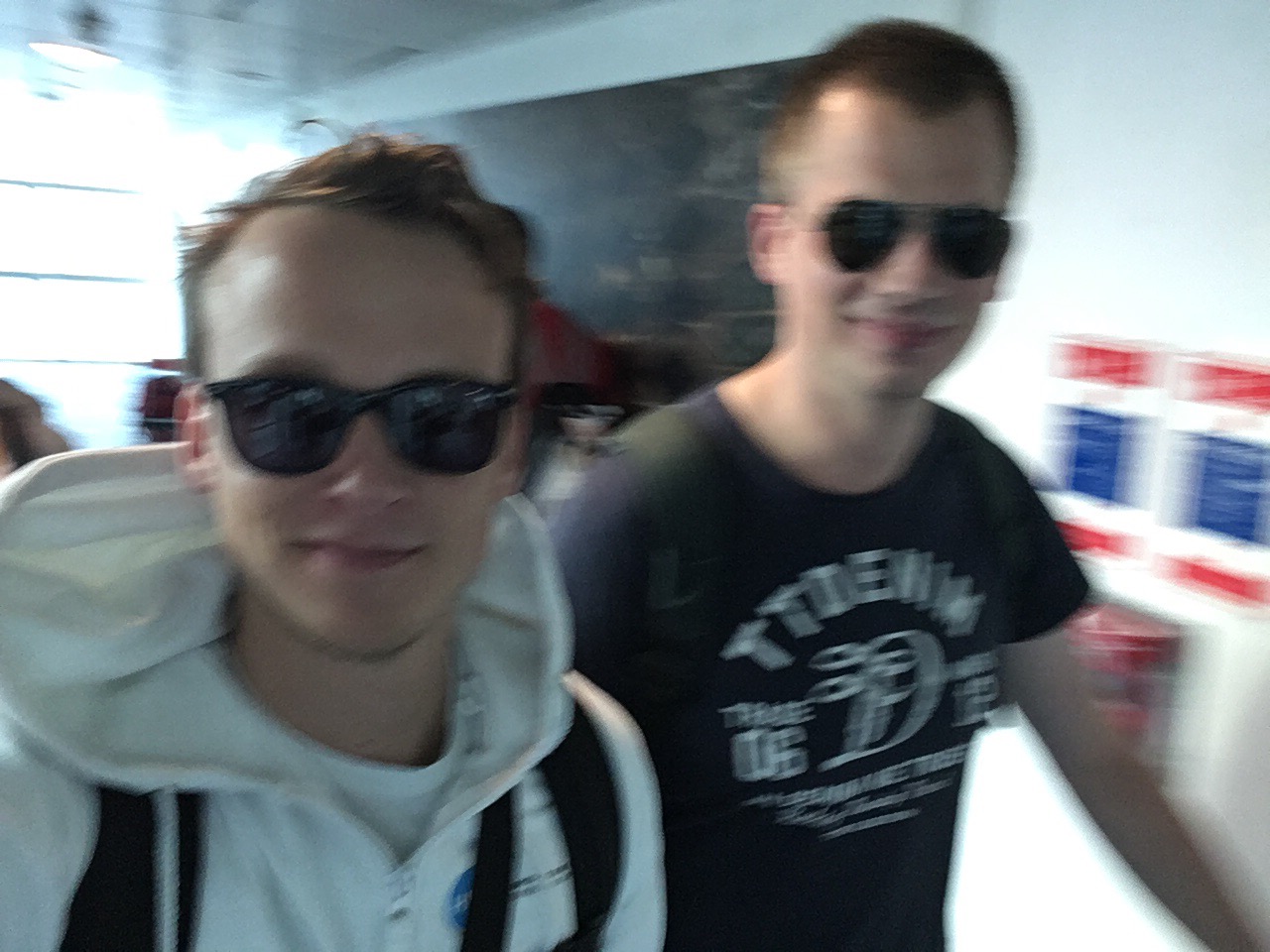 …Very tired now but we could at some impressions and have made some beautiful photos.
M 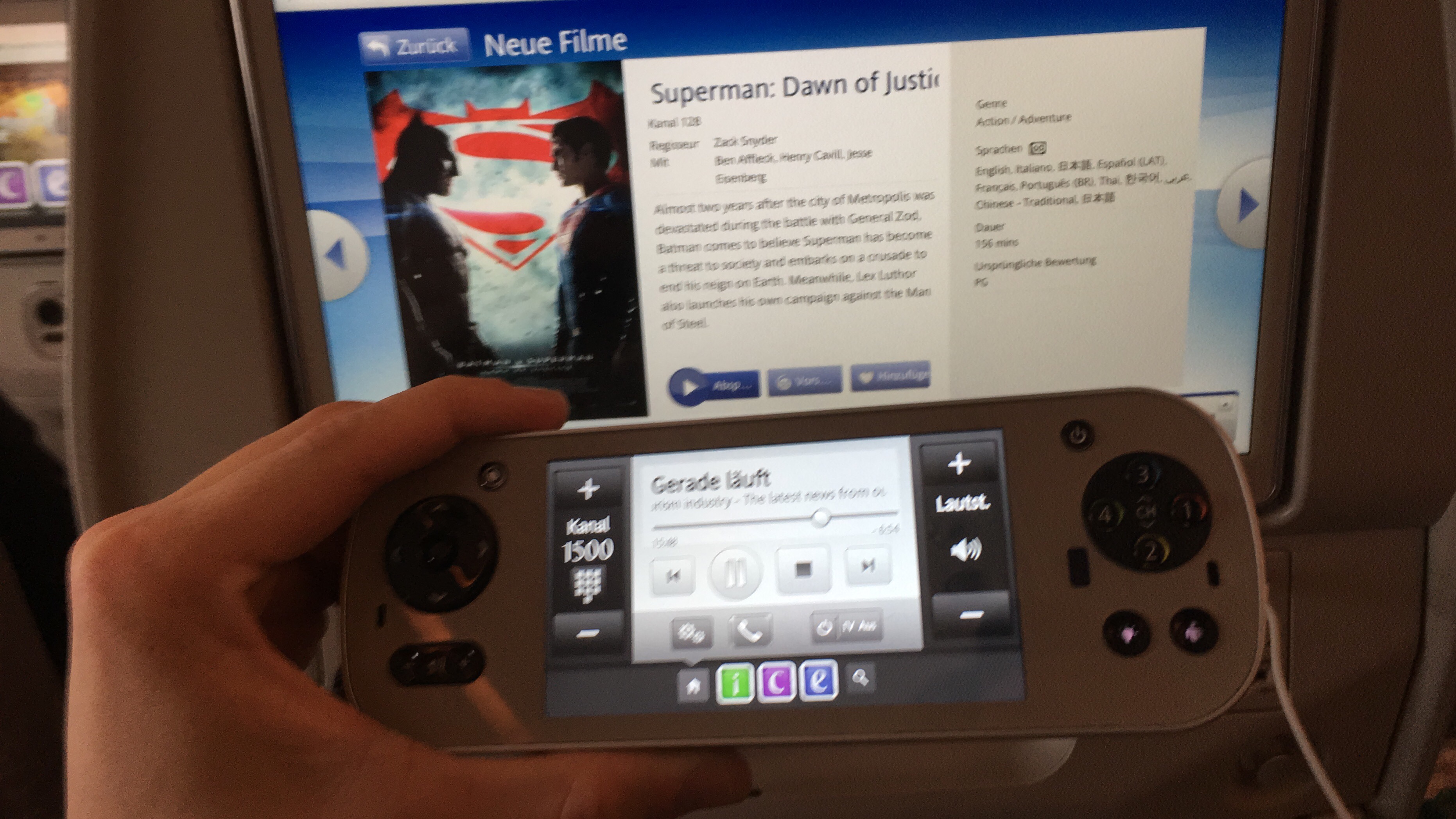